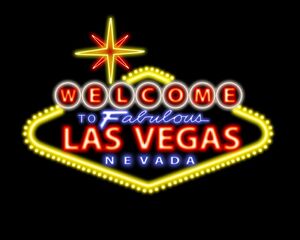 Las Vegas was the most populous city, with about 2 million residents, in the state of Nevada, internationally renowned as a resort city for gambling, shopping, and fine dining. In 2008, Las Vegas fell victim to a zombie outbreak. As a result, the military sealed the city with a 50-mile-perimeter blockade, according to the measures lined out in the Willamette Act, as ordered by the President. Their plan was to obliterate the city to prevent further outbreaks. The city was soon wiped off the map, and its remains are currently sealed off by the government. An estimated one hundred thousand people were killed and a million more infected, according to a live broadcast by Rebecca Chang who was in Las Vegas at the time of the outbreak.

It is revealed in the four-series comic book, Dead Rising: Road to Fortune, that Harjit Singh caused the outbreak by releasing several jars of Queens at the Las Vegas Arena while a racing show was ongoing.

In the 4-part comic book series Dead Rising: Road to Fortune, Las Vegas serves as the setting for issues one, three, and four.

At the Las Vegas Arena, the Las Vegas 250 motocross race is being held. Chuck Greene, a renowned champion, is competing in the event with his family watching. While the show is ongoing, Harjit Singh and his Phenotrans agents release Queens into the stadium, which start an outbreak. Soon, the entire crowd of spectators are infected and turn into zombies while others are killed. Pam Greene is stung and tries to escape with her daughter, but she turns into a zombie and bites Katey. Chuck arrives in time to save Katey and flee.

Clay Hurlton was also at the arena and was killed, but he was able to warn Tyrone King not to come to the city. The city is ultimately overrun by the zombies and the events of Dead Rising 2: Case Zero begin.

Chuck Greene, his wife, and his daughter Katey were in Las Vegas for Chuck's motocross race when a zombie outbreak of then-unknown origins broke out. Unfortunately, Chuck's wife was infected, and bit four-year-old Katey on her arm. The father and daughter fled to the desert town of Still Creek, having to leave their deceased wife/mother back in Las Vegas. According to a news report on the radio, the military had set up a 50-mile perimeter around Las Vegas, including Still Creek which is 46 miles away, planning on wiping out the area in an effort to contain the outbreak. Other refugees from Las Vegas have reached Still Creek, only to be captured by the military (such as the infected Sharon) or forced to flee into hiding (such as Gemini, Nikki, Archie, and others). Eventually, all survivors were rescued and brought to the barricaded gas station until the military arrived, evacuating the survivors to safety for screening and treatment.

By the end of 72 Hour Mode, it is discovered that the city outbreak was caused by Phenotrans, in order to harvest queens and make more Zombrex.

"It has been almost twelve hours since the first reports of a zombie outbreak in Las Vegas. The death toll is estimated to be over one hundred thousand, and as many as a staggering one million people may be infected. The president has initiated the Willamette act, and the government is scrambling to respond to this disaster. To ensure that the contagion does not spread, the military has set up a fifty mile perimeter outside Las Vegas. They have "shoot to kill" orders for anyone off the main roads. The number of vehicles leaving the city has trickled to a stop in the last few hours, an ominous sign that few survivors remain. With thousands of vehicles having escaped the city over the past twelve hours, military and government personnel are screening everyone at the roadblocks before allowing them to leave the quarantine area. Anyone discovered to be infected but not yet turned will be quarantined and reportedly given medical attention. Sources say that the controversial drug Zombrex, which is said to inhibit the zombification process for a period of twelve hours, is being widely administered. The fate of the quarantined remains unclear at this time. The government has issued no statements regarding where they will be taken, or what will become of them. This is Rebecca Chang reporting live from just outside Las Vegas."
—Rebecca Chang[2]

Traffic leading out of the city

Traffic leading out of the city 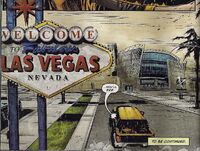 Chuck Greene, his wife, and his daughter arrive at Las Vegas in Dead Rising: Road to Fortune. 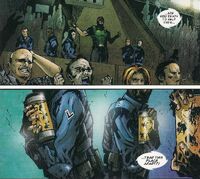 Harjit Singh and his team prepare to start the Vegas Outbreak. 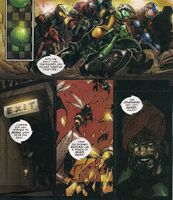 The beginning of the Vegas Outbreak. 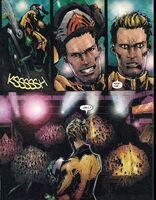 Chuck bears witness to the horror. 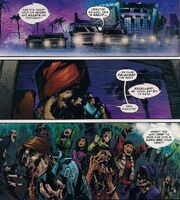 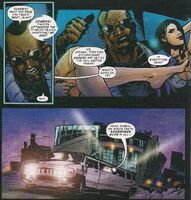 Tyrone King decides it's not smart to visit Las Vegas.

The triumph of Phenotrans after the Las Vegas Outbreak.
Add a photo to this gallery

Retrieved from "https://deadrising.fandom.com/wiki/Las_Vegas?oldid=376802"
Community content is available under CC-BY-SA unless otherwise noted.