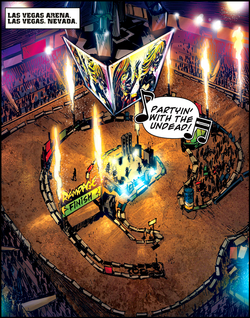 The Las Vegas 250 is a motorcycle racing event held at the Las Vegas Arena on Sept. 11, 2008 in Dead Rising: Road to Fortune.

The event consists of thirty laps with a grand prize of $250,000. Motocross star Chuck Greene intended to compete and win the race, planning to use the prize money for the betterment of his family. During the race, Harjit Singh and a group of Phenotrans mercenaries release canisters of virus-carrying bees in the crowded arena. Chuck finished the race in first place, but only in time to witness the zombie outbreak happening all around him.

Retrieved from "https://deadrising.fandom.com/wiki/Las_Vegas_250?oldid=368681"
Community content is available under CC-BY-SA unless otherwise noted.