Chuck’s competition on Terror is Reality. An obsessed former fan, now determined to beat Chuck at the ultimate death match.

"But never forget, chump. I'm number one!"
—Leon, as he burns to death in front of Chuck.

Leon Bell is a psychopath who appears in the Dead Rising 2 mission: Meet the Contestants, he also makes a brief appearance in Dead Rising: Road to Fortune.

He is a Terror is Reality contestant who idolized Chuck Greene when he was a professional Supercross racer, but thinks he has gone soft since then. He is a survivor of the Las Vegas zombie outbreak, and a psychopath in the Fortune City outbreak.

When he is not competing at the Arena, he is greeting tourists outside his booth and trailer, set up outside the Yucatan Casino.

Leon does make a cameo appearance in Road to Fortune, he can be seen racing alongside Chuck Greene in the Las Vegas 250. He wears the color green, just as he does in Dead Rising 2. Except he has the number 23 instead of number 9. For a brief moment, Leon actually goes in front of Chuck during the race.

Ironically, during a call with Tyrone King, Clay Hurlton says: "we can use some of the racers [in the Las Vegas 250] for the show". Since Leon and Chuck are the only racers to survive the outbreak, it is most likely he is talking about them.

In the game's Introduction, Leon competes against Chuck Greene, Anim White, and Kristopher Bookmiller in the Terror is Reality event. Before they head on stage, Leon taunts Chuck about his dead wife, implying that Chuck's incompetence was the cause of her death.

In the mission Meet the Contestants, Leon confronts Chuck in front of the arena, revealing to Chuck that despite his hostility, he was a massive fan of Chuck during his motocross days, but now believes Chuck to have gone soft. After the conversation the survivor Carlos Mertiz tries to get their attention by waving hands and yelling. When Chuck tries to approach Carlos, Leon kills him by cutting him down with his slicecycle, having decided that the outbreak is nothing more than an extension of the games where humans are worth "double points". Leon then goads Chuck into a motorcycle battle through the Platinum Strip after throwing him a bike key.

Upon his defeat, his motorcycle's gas tank springs a leak as he heads back to his motorcycle trailer. After he sees Chuck, Leon taunts him more and begins to spin his bike in a low dip, causing the attached chainsaw to create a spark and ignite the bike and himself. Leon continues to taunt Chuck as he is immolated, claiming he will never beat him. When Leon finally falls to the ground, Chuck dryly quips "Yeah, you're on fire".

Killing Leon unlocks his motorcycle trailer, which contains a motorbike and a workbench for creating customized vehicles, like the slicecycle. 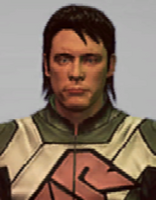 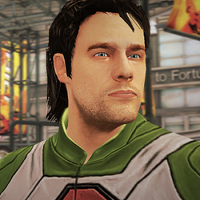 Leon in his TiR outfit. 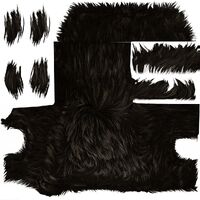 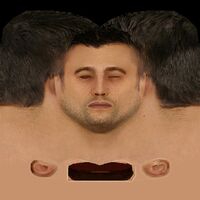 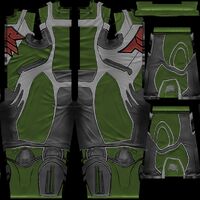