Let's Blow This Town is a side mission in Dead Rising 3 during Chapter 3.

Nick can investigate an RV on the Los Perdidos Bridge to find Hank. He's broken down, and asks Nick to collect him a few things to help his RV get up and running again.

He will request that Nick gather him a acetylene tank and a propane tank. Nick tries to warn Hank about the dangers of mixing the two explosive components, but Hank is insistent that this is exactly what he needs.

Finally, he'll requests that Nick brings him a gasoline canister. Once Hank has the three items, he will combine them, only to produce some very explosive results. His RV will blow up, killing him in the explosion.

Jamie calls for the mission. 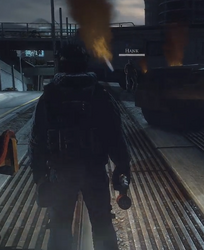 Hank's RV is on fire.
Add a photo to this gallery
Retrieved from "https://deadrising.fandom.com/wiki/Let%27s_Blow_This_Town?oldid=397264"
Community content is available under CC-BY-SA unless otherwise noted.