"Madonna! My Madonna is out there!"
—Lindsay, on finding Madonna

Lindsay Harris is a victim appearing in Dead Rising and Dead Rising: Chop Till You Drop found in the Willamette Parkview Mall.

She was found on the first day in the Entrance Plaza, looking for her dog Madonna. She was killed when she allowed the zombies to break into the plaza.

In the Introduction Lindsay Harris and her dog had made it to the mall for refuge before the zombie outbreak overwhelmed Willamette. Frank arrives at the mall to find Lindsay looking for her dog Madonna in a confused state, carelessly bumping into others such as him and Ryan LaRosa.

She later saw Madonna outside the doors among the zombies, and attempted to remove the barricades to rescue her. Though her fellow survivors tried to stop her, they failed and Lindsay unfortunately allowed the zombies to break into the Entrance Plaza. She was killed by the zombies before she could reach Madonna.

In Infinity Mode, Lindsay appears at the Heliport, already dead, from 1:07:00 to 1:19:00. Frank can find an Uncooked Pizza, Baseball Bat and 4 bags of Pet Food near her corpse.

Lindsay frantically searches for her dog. 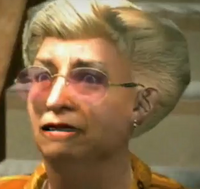 "Have you seen my Madonna!?"

Linsday invites the zombies in. 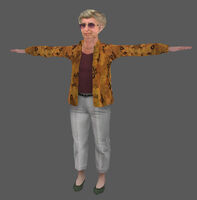 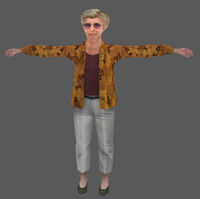 Model of Lindsay Harris.
Community content is available under CC-BY-SA unless otherwise noted.