Still needs to relax. Found in The Venus Touch Spa.

"Thanks. I don't suppose you have any aloe?"
—Linette, after being rescued

Linette Watkins is a survivor in Dead Rising 2, found in The Venus Touch tanning salon during the mission Wilted Flower. She reappears in Dead Rising 2: Off the Record with the same role.

Linette is badly sunburned after getting stuck in a tanning bed, and will request a drink before being taken to the safe house. Her sunburn makes it painful for her to move on her own, so Chuck will have to carry her. She suggests to Chuck that he take her to Brand New U, claiming that she knows a shortcut that will lead to the Royal Flush Plaza which begins Linette's Passage.

Escorting Linette to the Brand New U store will unlock a shortcut between the Palisades Mall and the Royal Flush Plaza.

Erotica photo in Off the Record.

Frank carries Linette back to the Safe House. 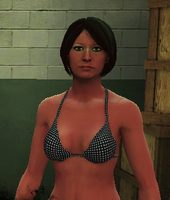 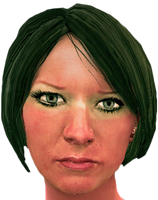 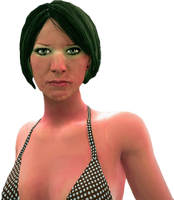 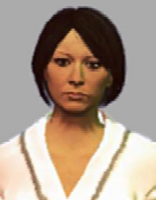 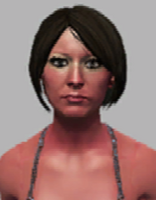