The looters are people who survived the outbreak and are now looting stores as psychopaths in Dead Rising 2 and Dead Rising 2: Off the Record. They are a group of scavengers who take advantage of the zombie outbreak in Fortune City by looting various stores and businesses. They are first encountered in Zombrex 1 and can be found in various stores afterwards. They are dressed in gray hooded sweatshirts with "Fortune City, Nevada" written in white across the chests, red bandanas, and backpacks.

The official guide described looters as:

"Immoral men are also present in the quarantine zone, seeking to plunder whatever they can get their hands on...aside from their speed and aggression, they aren’t much more challenging than zombies."[1]

Reinhold, Banchester, Tarquin, and Septimus, the looters in the four pawnshops, will sell Chuck their "ill-gotten" goods after Chuck speaks to Reinhold in the mission One Man's Trash. Every other looter Chuck meets will attack Chuck.

Looters always come in groups, often found scavenging through stores. They are always armed with a flashlight, tomahawk, or crowbar, and also may switch to spray paint if they get close enough to Chuck.

In Zombrex 1, Chuck Greene first encounters them when he is looking for Zombrex in a supermarket, finding three of them terrorizing a pharmacist named Denyce Calloway, demanding access to the store's nonexistent safe. Chuck intervenes, and is forced to kill the crooks to save the pharmacist.

Other looters inhabit pawnshops, abandoned stores that have been turned into semi-functional businesses, selling combo weapons and other goods, such as Zombrex. Such pawnshops include Moe's Maginations and Just in Time Payday L*ans.

More looters can be found in some stores in the malls located throughout the city, rummaging through goods and attacking Chuck on sight.

The looters can be found in operating business in the four stores which have been converted into Pawnshops.

These four storekeeper's names are only revealed when using a mod.[8]

Looters are typically found in groups of three, each wielding a crowbar, a flashlight, and a tomahawk (in Off the Record some will also carry Money Hackers). At some places, two groups of three looters can be encountered simultaneously.

In Dead Rising 2: Off the Record, looters are more aggressive. They will chase and attack Frank with greater persistence and will throw Molotovs at him from a distance. When spraying, they will attempt to steal Frank's money and the item in his hands, but Frank can get those items back if he catches the looter fast.

It's also possible to "loot" a looter by spraying one with spray paint. While he is stunned, Frank can put his item away (he must be barehanded) and press the action button to steal some money from him. 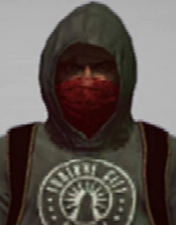 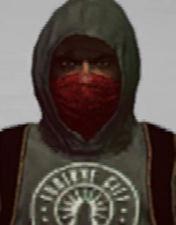 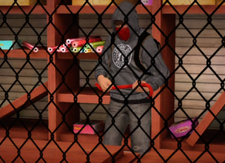