The Lust Cannon is a unique weapon in Dead Rising 3.

It is used by Dylan Fuentes during the side mission Play Time. After his death, Nick can pick up his weapon and use it for himself.

It can also be found in any safe house weapon locker under the firearm's section. 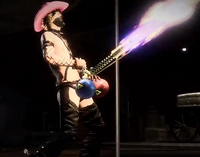 Dylan with the Lust Cannon.

Add a photo to this gallery
Retrieved from "https://deadrising.fandom.com/wiki/Lust_Cannon?oldid=398504"
Community content is available under CC-BY-SA unless otherwise noted.