Wanted to make it big in the entertainment industry. Killed by magicians

Madison Lainey is a victim in Dead Rising 2. She is found during the mission World's Most Dangerous Trick, where two magicians carelessly kill her in a failed magic trick. She reappears in Dead Rising 2: Off the Record with the same role.

Madison was listed by Gretchen Peregrine on the August 6, 2010 Tape it or Die blog post as one of the members whom they would meet with in Fortune City.

Madison was in Fortune City in hopes of making it big in the entertainment industry. Due to reasons unforeseen, she ended up in the hands of magicians Reed Wallbeck and Roger Withers. The magicians, intent on becoming world-famous and mastering the "saw a woman in half" trick, tied up Madison on their table in their theater.

When Chuck entered the theater, he witnesses the magicians perform the dangerous trick and fail, as Madison was gruesomely cut in half with a large circular saw. 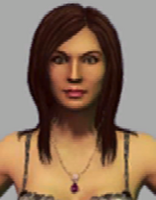 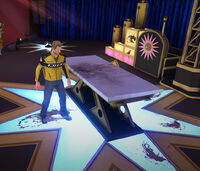 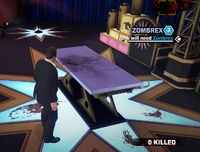 After the cutscene, Madison's body disappears (Dead Rising 2: Off the Record) 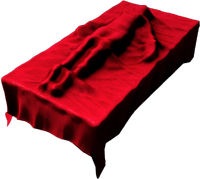 Item cine_magiciancloth in Items.txt. This is Madison covered with a red sheet before the magicians uncover her.

Madison lying on the table.

Madison lying on the table and about to be cut in half.

We have a volunteer!

Madison spawned with help of mod