Maggie is a character appearing in Dead Rising: Watchtower.

She is portrayed by actress Virginia Madsen.

Maggie is first seen during the beginning of the outbreak sitting near a child's corpse. She reveals to Crystal that the child was her daughter and she had been forced to kill her daughter in self-defence. Maggie reluctantly joins Chase and Crystal when a few zombies start chasing them and they are forced to take shelter in a pawn shop.

She allows Chase to interview her on her daughter's transformation and to explain how her daughter was infected. She is shown to be mentally deteriorating as she constantly forgets about her daughter's death and still believes she had survived. Throughout the film, Maggie takes a supportive role towards Chase and Crystal.

While the group is investigating a Zombrex warehouse, Maggie hears the voice box of a toy and investigates the noise's origins. She has a mental collapse upon seeing the zombified children in the room and allows herself to be eaten by the zombies while believing that one of the children was her daughter.

Maggie later re-animates as a zombie and infects Logan which helps Chase and Crystal escape the warehouse. 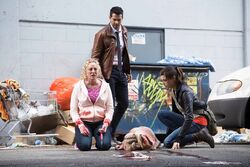 Crystal and Chase find Maggie near her deceased daughter. 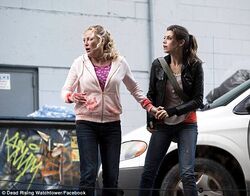 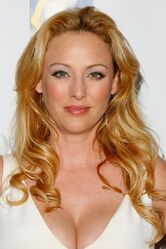 Actress Virgina Madsen.
Add a photo to this gallery
Retrieved from "https://deadrising.fandom.com/wiki/Maggie?oldid=385921"
Community content is available under CC-BY-SA unless otherwise noted.