"I heard this from Brad, but apparently he heard a voice in the Entrance Plaza. Go check and see if somebody's there, OK?"
—Otis Washington

It takes place in a clothing store in the Entrance Plaza during the afternoon on the first day. A mall employee, Bill Brenton, has been trapped in the store two days before the zombie outbreak began.

In the Entrance Plaza, Frank West notices zombies outside a clothing store. Upon investigation, he finds Bill trapped behind a stack of cardboard boxes. After Frank tears down the pile, Bill explains that he has been trapped in the store for two days after the cardboard boxes fell.

Bill thanks Frank and runs off, expecting a day off, only to be stopped in his tracks upon seeing the zombies. After he realizes what is going on, he agrees to go to the Security Room with Frank.

Bill runs off only to stop at the entrance of the store when he sees the zombies. When Bill realizes what is going on, he agrees to go to the security room with Frank.

Further information: Man in a Bind/Gallery 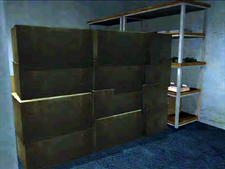 Bill is trapped behind a pile of cardboard boxes. 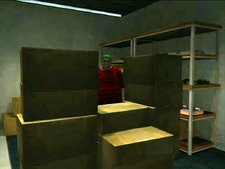 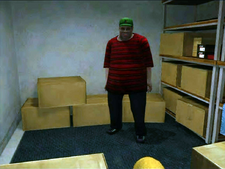 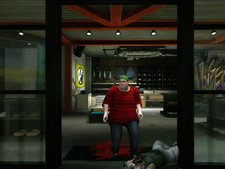 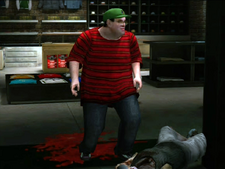 Bill sees the zombies and stops.