Was wandering around the Entrance Plaza.

"Zombies are slow, I'm not afraid of them."
—Mark Quemada, on zombies

Mark Quemada is a victim appearing in Dead Rising and Dead Rising: Chop Till You Drop.

He was found in the Entrance Plaza of the Willamette Parkview Mall. He was killed when Lindsay Harris removed the barricades and allowed the zombies to break into the plaza.

In the Introduction, Mark had made it to the mall before the zombies overwhelmed Willamette. He was found wandering around the Entrance Plaza, trying to convince himself that he was not afraid of the zombies.

When the zombies broke into the plaza, he attempted to flee, but was killed before he could reach safety. 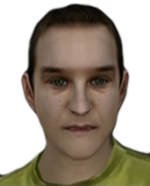 Mark lies dead in a pool of blood. 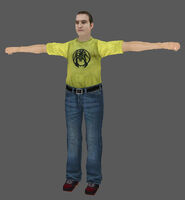 Model of Mark Quemada.
Community content is available under CC-BY-SA unless otherwise noted.