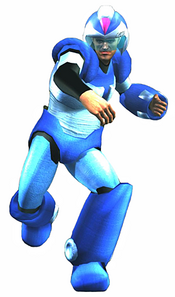 The Mega Man Outfit is an unlockable costume in Dead Rising.

The suit is unlocked in different parts. If you want the outfit to be really convincing you should also unlock the Real Mega Buster.

To unlock the boots you must first obtain the achievement "Unbreakable". Contrary to popular belief, the boots do not prevent weapons from breaking.

To unlock the tights you must defeat ten Psychopaths, getting the achievement "Punisher"

The helmet isn't unlockable with an achievement, but is instead found at the gift shop in Colby's Movieland.

The suit is an obvious reference to Mega Man, another game series by Capcom.