By modifying various files, it is possible to change the text that is displayed in game.

Mappings that you Do NeedEdit

How to Edit a File Using a Hex EditorEdit

Easiest: How to edit Dead Rising 2 without a hex editorEdit

You can edit the same amount of characters in notepad++ without having to use a hex editor.

Write the new text under the old text in a new file. Every character is the same length in regular Notepad, so you can measure easily.

Copy the new text and paste it over the old.

This is the simple way to edit text, but has a major restriction, your new text must be the same length, or shorter, than the existing text.

To edit the text, type over the top (overwrite) the text that is currently there.

You can edit nearly any piece of game text in this way. 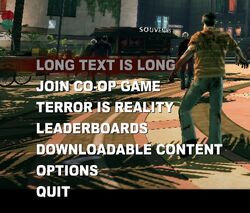 It is however possible, but more difficult, to change the text to say something longer than it currently does.
Again, we'll use the "START GAME" text as an example.

Observe the text says "START GAME" and is NULL separated from the next piece of text, "JOIN CO-OP GAME" found at address 0x0000F300.

So, to find the pointer to the piece of text you wish to change, you must search the file looking for the address of the piece of text you want to change. "START GAME" is found at address 0x0000F2F5. So you must search for "F5F20000" (some Hex Editors will want you to search for "0000F2F5", this will vary from editor to editor) - remember the pointers are stored in Little Endian format.
Don't forget that when searching for Hexadecimal data as we are doing here, rather than text, you may need to switch your Hex Editor's Search function into Hexadecimal Mode, or similarly named - not all Editors will require this.

Go near the bottom of the file to address 0x0005DEF0. This part of the file is essentially empty, being filled with lots of NULL characters. This makes a great place for us to put some of own text.

Type some text here, such as "LONG TEXT IS LONG", making sure to leave a NULL character after your own text.

Observe that the text on the Main Menu has changed, and that we changed the text to something that was longer than the original text. In this way it should be possible to change any text in the game, to almost anything.

Retrieved from "https://deadrising.fandom.com/wiki/Mod:Changing_Text?oldid=257793"
Community content is available under CC-BY-SA unless otherwise noted.