In the Introduction, one squadron, consisting of eight soldiers and a vehicle, was witnessed by Ed DeLuca and Frank West at a roadblock on the highway as they flew into town.

At the end of Dead Rising 2: Case Zero, the National Guard arrives in Still Creek and tells Chuck to surrender himself and his infected daughter Katey for "screening". This most likely determines whether someone is infected or not. If a person is found to be infected, they would most likely be executed by the National Guard, thus leading Chuck to retaliate and escape Still Creek.

In Dead Rising 2, the AZU (Anti-Zombie Unit) was first ordered to quarantine Fortune City, which took 72 hours. In the cutscene for Case 1-1: Big News, at the bottom of the Channel 6 Action News report, it says that the National Guard advised the families of the victims in the Fortune's End outbreak to send them photos of their loved ones so they can determine whether they are dead or alive. When the National Guard arrived, they quickly became overrun by a mutated kind of zombie. Most of their soldiers died. The only survivor, that you can find besides Michael Woo and Matthew Kuss. the sergeant became paranoid and fled underground, taking reporter Rebecca Chang hostage until he was defeated by Chuck. 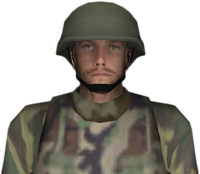 Blockades set up by the National Guard 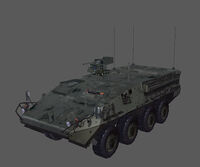 Model of armor vehicle
Add a photo to this gallery

Retrieved from "https://deadrising.fandom.com/wiki/National_Guard?oldid=391930"
Community content is available under CC-BY-SA unless otherwise noted.