Might not be playing with a full deck. Found playing poker in the Atlantica Casino.

"You're aces, fella!"
—Nevada, upon reaching the safe house

Nevada Slim is a survivor in Dead Rising 2. He is a professional poker player found in the Atlantica Casino during the unannounced mission High Rollers. He reappears in Dead Rising 2: Off the Record with the same role.

In High Rollers, Chuck Greene comes across Nevada, Jessica Howe, and Jacob Skinner standing around a poker table in the Atlantica Casino. When he tries to get the three survivors to follow him to the Safe House, they refuse and tell Chuck that they will only follow him if he beats all three of them at poker. They tell him to buy in at the table for $100,000.

Once Chuck defeats them in poker, they will agree to follow him to the Safe House.

Nevada is one of the crazed survivors Frank can fight in Sandbox Mode. He will spawn in Moe's Maginations with a handgun. Once defeated he drops his weapon and $10,000. 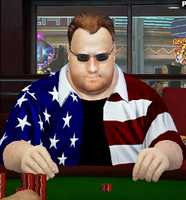 Nevada and his friends. 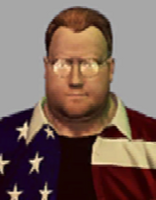