"I'm getting the hell out of this city, I'm taking my friends with me."
—Nick Ramos

Nick Ramos is the playable protagonist of Dead Rising 3.

Nick is a mechanic who works for Wrench O' Rama in the fictional city of Los Perdidos. He was an orphan and has no recollection of his early childhood years. He has a mysterious, unknown past. One of the few things he remembers was that he always had a tattoo of the number 12 on the right side of his neck. [1]

He, along with other survivors, seeks a means to escape Los Perdidos before it is firebombed by the military.[2][3] He travels with his boss and owner of Wrench O' Rama Rhonda and a truck driver Dick throughout the city and combine their efforts to escape Los Perdidos within the six day time limit, before the announced bombing by the military is set to occur. During the course of the game, it is discovered Nick is naturally immune or resistant to the zombie infection, as shown by his bite wounds healing instead of festering.

Nick is the youngest Dead Rising protagonist so far, allowing him to grow more as the story develops. In the beginning stages of the outbreak, Nick comes off as a naive and somewhat cowardly young man who has difficulties formulating plans. His intentions, however, are always good: he always puts people's thoughts and needs before his own. Nick begins to develop a sense of purpose as he fights for survival during his time spent in Los Perdidos.

Unlike Chuck Greene, Nick has the ability to make combo weapons on the spot without the use of a workbench.[4]

He has a romantic interest in Annie, and at the end of the game, the two begin a relationship.

Before the outbreak begins, Nick is driving a car to a customer for his job at Wrench O' Rama. He meets a young woman named Annie, who he believes at first to be another customer. While initially attempting to flirt with her, he soon realizes that she is actually stealing the car, and chases after her. But before he can, they are both swarmed by a sudden horde of zombies.

They manage to work together to escape, before running into another survivor, Dick Baker, and the three attempt to leave the city. This is when they realize that a full scale outbreak has begun, and the government has already quarantined the city. Annie is also revealed to be an infected illegal. They meet up with Nick's boss Rhonda and attempt to find shelter in a diner.

During the events of Dead Rising 3, Nick attempts escape the city with a group of survivors before the military deploys a large incendiary bomb, destroying all organic life in the city. The bomb is to be deployed in 6 days from the game's beginning.

Nick and Rhonda work together to rebuild an old military plane so that they can use it to leave before Los Perdidos is bombed. It is later revealed by Isabela Keyes that he is one of Carlito Keyes' orphans from the Santa Cabeza outbreak, known as "number 12", and his blood contains the cure for the zombie infection.

Nick being threatened by Red. 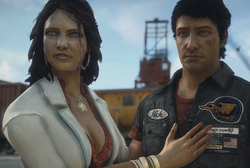 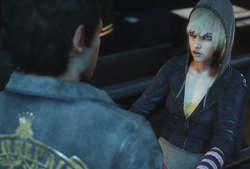 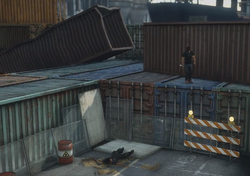 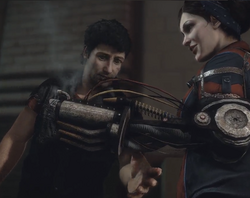