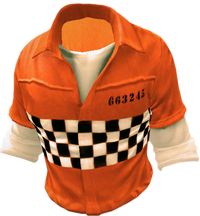 The Orange Prison Outfit is clothing found in Dead Rising 2. It is unlocked by obtaining the Judge, Jury and Executioner achievement/trophy, and is held in the locker in the Safe House restroom.

Retrieved from "https://deadrising.fandom.com/wiki/Orange_Prison_Outfit?oldid=357194"
Community content is available under CC-BY-SA unless otherwise noted.