Pam Greene is a character in the comic series, Dead Rising: Road to Fortune and mentioned throughout Dead Rising series.

Wife of former motocross champion, Chuck Greene and the mother of Katey Greene, she was infected with the parasite that turns people into zombies, and later killed during the events of "The Las Vegas Outbreak." Pam is the reason why Katey always needs Zombrex to prevent her zombification, having bit her daughter's left arm after becoming infected.

Although Pam Greene never appears in any game in the Dead Rising series, Chuck and Katey often talk about her in Dead Rising 2 and she is also used as a plot device.

Pam appears (and is named) in the first issue of Dead Rising: Road to Fortune. As the Greene family is traveling to Las Vegas for the Las Vegas 250 motocross event, Pam expresses concern in traveling to the city, due to a broadcast by Rebecca Chang on the radio says there's been all kinds of zombie problems around Vegas, "maybe it's not the safest place to be." [1] A confident Chuck reassures her, saying that Chang always makes situations sound more dire than they already are, and that he would win big in Vegas. This is ironic as she ends up perishing in the outbreak, when she was the only one who was nervous about a possible zombie outbreak.

In the third issue of Dead Rising: Road to Fortune she is at the motocross event that Chuck competes in with her daughter. She is stung by a queen, becomes a zombie, and bites her daughter Katey. Chuck stabs her through the head with a screwdriver.

In Dead Rising 2: Case Zero, When giving Katey her Zombrex she asks Chuck Greene why Mommy bit her to which he replies that wasn't her mommy it just looked like her.

In Dead Rising 2, Pam (who is never referred to by name) is only mentioned in passing as having turned into a zombie during the Las Vegas Outbreak. She had bit Katey after zombifying, forcing the newly-widowed Chuck to work tirelessly in order to obtain a constant supply of Zombrex for his precious daughter.

In Dead Rising 3, Pam is mentioned by Chuck Greene in an argument with Nick Ramos. 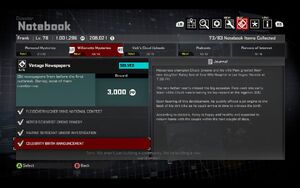 The Greene family, from left to right: Pam, Katey, and Chuck. 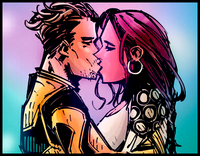 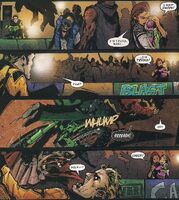 The Greene family in "The Las Vegas Outbreak". 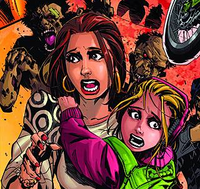 Pam bitten by queen in stadium. 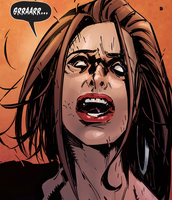 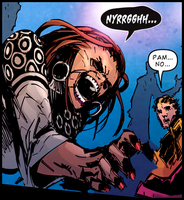 Katey is bitten by her mother.

Pam is stabbed and killed by Chuck. 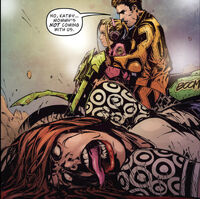 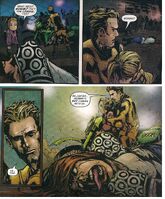 Chuck and Katey abandon Pam Greene.
Add a photo to this gallery

Retrieved from "https://deadrising.fandom.com/wiki/Pam_Greene?oldid=398315"
Community content is available under CC-BY-SA unless otherwise noted.