"Sorry, Kid. But I guess my option out of this B.S is to get rid of all the witnesses"
—Phil, before attacking Nick/Dick and Warren

Phil is a hostile survivor in Dead Rising 3. He is encountered during the side mission Will or Away in Chapter 5.

Will or Away[edit | edit source]

After a call from Jamie about an "anxious-looking dude", Nick finds Phil in front of his house. When approached, Phil asks him to go inside his house (which is filled with zombies) and collect a will for him, which is supposed to allow him to retire. However, while exploring the house, Nick encounters Warren Anderssen Jr., who explains that Phil, who was his step-father, locked him inside the house and let the zombies inside in order to kill him and assure that the will is his.

Nick goes to Phil to confront him about this, and Phil starts to blame Warren's mother for marrying him in the first place, saying that he should get what's his. He then says that he needs to "get rid of the witnesses" and attacks them. After he's killed, Warren will join Nick's posse. 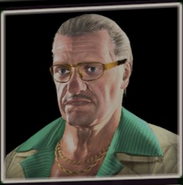 Phil's unused portrait.
Add a photo to this gallery
Retrieved from "https://deadrising.fandom.com/wiki/Phil?oldid=398028"
Community content is available under CC-BY-SA unless otherwise noted.