Photography is a game mechanic present in the Dead Rising series. The main incentive is to capture unique photographs to score Prestige Points (generally referred to as PP Points.)

Photo Ops refer to special survivors actions that can be photographed for large amounts of Prestige Points. Most psychopaths have photo ops during their encounters, whereas only a number of survivors do. Once a photo op is successfully photographed, it will not appear for the rest of the playthrough. Some photo ops require certain conditions to occur. Photo Ops return in Dead Rising 2: Off the Record starring Frank West.

It made its introduction in Dead Rising, to go along with protagonist Frank West; a photographer. After taking thirty pictures, Frank must replace the batteries of his camera in one of the camera stores around the mall.

Photography was absent in the sequel; Dead Rising 2 and its prologue; Case Zero as the protagonist; Chuck Greene is a former motocross champion. Unlike Frank, Chuck has no interest in the media, and has a much more personal motive to fight, such as keeping his infected daughter alive.

Along with Frank, photography returned in Case West, the epilogue to Dead Rising 2. This time however, Chuck himself can take evidential photographs (albeit with a significantly less advanced camera than Frank's) as plot involves the exposure of criminal pharmaceutical company; Phenotrans.

In Dead Rising 2: Off the Record, Frank takes pictures with a digital camera and is able to perform a move on a zombie, where he extends his arm with camera in one hand, and his other arm around the zombie's shoulder and takes a typical "cheesy, tourist" photo.

In Chop Till You Drop it is impossible to use the camera.[1]

The opening cutscene of Dead Rising shows Frank and Ed DeLuca in a helicopter on their way to Willamette. Frank explains that he received a tip-off that something big was going down in Willamette, and orders Ed to fly them over the main street so he can take some pictures of what he believes to be a mass riot.

This segment acts as a tutorial for the player to learn how to take pictures and gain some experience. There are four major opportunities to be photographed, each of which can rack up some major PP Points.


NOTE - Pressing the "START" button will skip the helicopter ride and bring you straight to the rooftop.

The first major event comes when Frank and Ed spot a lone motorist desperately fending off a group of zombies from atop his vehicle. He swings his baseball bat wildly before noticing the helicopter and waving for assistance. However, he is soon outmatched when the zombies drag him down and devour him.

This photo opportunity can score the player up to 400 PP Points. Using the camera zoom function, and making sure to capture the zombies in the shot can help increase the score.

The second event depicts a swarm of zombies gathered around a school bus at an intersection. Presumably trying to get to the person(s) inside, they are repeatedly pounding on the windows and rocking the bus. There is not much action taking place, but the scene itself offers between 100-300 PP Points if photographed. Again, the more zombies in the shot, the better.

Thirdly, as Ed and Frank fly by, the Tornado Gas Station suddenly explodes, sending numerous burning zombies hurtling across the street. This presents a golden opportunity to score some PP Points in the high hundreds. Timing the shot for the explosion is key here, as unexpecting players may miss this chance.

Finally, right after the gas station explosion, just as Ed begins to take the helicopter up, Frank demands he get closer to a certain building as he can see activity on the rooftop.

It turns out there is a crowd of zombies closing in on a woman. The woman is armed with a handgun, but soon runs out of ammo. She then throws her gun at a zombie and flails her arm at the helicopter to signal for help. Unfortunately, three zombies grab her and she loses her balance and falls, her body (and the zombies) splatters as it hits the pavement below.

This event can score the player up to 700 PP Points. Timing is also useful here, and the player should aim to shoot just as the woman falls, and again mid-fall.

Frank can get new camera batteries once the previous ones die through taking too many pictures in three locations.

Photo Opportunities give Frank extra Prestige points by snapping a shot of certain characters as a yellow PP icon appears over their head when they perform a certain action.

The amount given for each shot will be determined by how well the shot is captured. Always zoom in for the closest possible angle. These are all worth up to a maximum of 10,000 Prestige Points.[2]

In Dead Rising, taking pictures at a certain time or of a certain body part will score you PP bonuses, giving you more points. The bonuses include:

The following is a list of various confirmed Bonus Photos that can be taken in Dead Rising:

Cut from the Same Cloth

Shadow of the North Plaza

Case 5-1: A Promise to Isabela

The Woman Left Behind

[THIS SECTION WILL CONTINUE TO BE UPDATED]

Off the Record Prestige Point StickersEdit

Off the Record Photo OpsEdit

There are more photo ops that have yet to be posted.

There is up to 200 Erotica PP points for taking a picture of one of the televisions.[6] 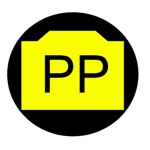 Shinji & Yuu bowing in thanks

Paul with his crotch burning 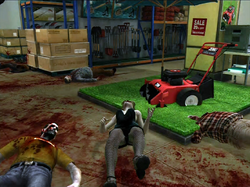 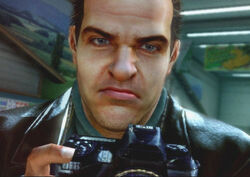 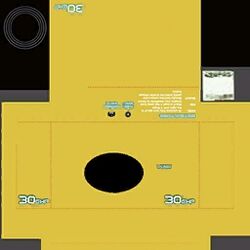 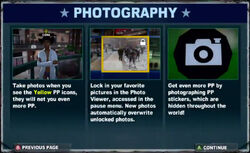 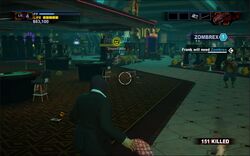 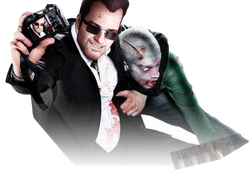 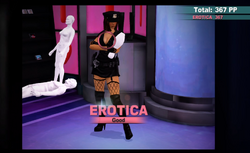 Long Legs of the Law

Special Photo Op
Add a photo to this gallery

In relation to taking pictures and gaining large amounts of prestige points, see:

Retrieved from "https://deadrising.fandom.com/wiki/Photography?oldid=395284"
Community content is available under CC-BY-SA unless otherwise noted.