"Let the machine do the throwing, and the zombies do the catching."
—Combo Card Description

Like its name suggests, its form of attack is launching plates at high speeds; the effect is rather like a high-velocity version of the saw blade's attack -- plates can cut through multiple zombies and kill gas zombies in one shot.

The combo card is obtained from Wallace Hertzog when you bring the ingredients to the Tape It Or Die Set.

The Plate Launcher is a heavy weapon; thus, it cannot be stored in the inventory, and injury will cause Chuck to drop it.

"You know those discs that people use for hunting practice! You know: "Pull!" Same idea, but you're firing plates at zombies with decapitation velocity."[1] 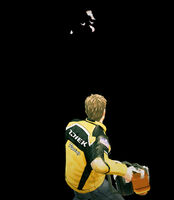 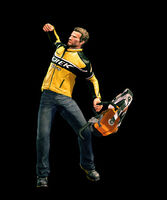 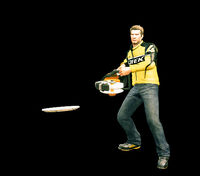 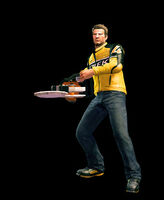