Start a Wiki
watch 02:19
The Loop (Games)
Do you like this video?
Dead Rising 2: Off the Record
Cases and Challenges • Locations • Survivors • Weapons • Food • Magazines • Clothing

The Protoman Armor is a special costume piece that appears in Dead Rising 2: Off the Record. It is awarded in Sandbox Mode after Frank West has unlocked all of the single-player Challenges and has won at least a bronze medal in every one of them.

The Protoman Armor is one of four items for the Protoman set of clothing, which when combined with the 3 other items, will give Frank increased resistance to damage.

All the parts of the costume will stay in a locker in the Safe House restroom. Frank can equip and unequip the pieces at any time. 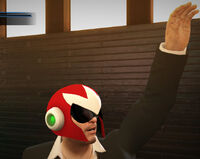 Add a photo to this gallery
Retrieved from "https://deadrising.fandom.com/wiki/Protoman_Armor?oldid=357237"
Community content is available under CC-BY-SA unless otherwise noted.