It can be crafted in the Combo Bay after the mission Meet the Contestants is completed, by combining a dirtbike with a giant stuffed rabbit.

The addition of stuffed rabbits results in extra padding around the bike, causing zombies to bounce off. Each zombie killed with the bike earns the player 50 prestige points. 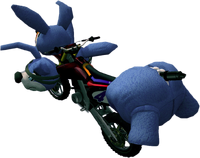