A socially awkward virgin and internet sex addict who is using the outbreak as a chance to get "married" to any unfortunate women he can find.

"You wanted me to wait until I was married... well, I'm not waiting anymore."
—Randy, to his father

Randall Tugman, better known as Randy, is a psychopath appearing in the Dead Rising 2 mission Here Comes the Groom. He is an obese man in a fetish costume who wields a Giant Pink Chainsaw. He reappears in Dead Rising 2: Off the Record with the same role.

Randy has taken both his father, Emanuel, and a young woman named Danni Bodine as his captives at the Swept Away wedding chapel. Emanuel begs his son to let them go, calling him "Randall," to which he replies he prefers to be called "Randy" and tells him to get on with the wedding ceremony. Danni tries to escape, but she is held back and restrained. Randy assures her that the other dead bride in the room meant nothing to him. Randy tells Emanuel that he always said that he wanted him to wait for sex until he's married and that he's not waiting any more and coerces his father into saying the final verses of the wedding ceremony, all the while revving his chainsaw in an excited and aroused manner.

As Emanuel notices Chuck Greene enter the chapel, he cries for help - causing Randy to turn around while still holding his weapon. The blade of the chainsaw cuts into the suspended Emanuel's abdomen, killing him as Randy confronts Chuck. He accuses Chuck of trying to ruin the happiest day of their lives, and attacks him.

After he is defeated, Randy is knocked onto his back. He notices the silhouette of a bride approach and calls out to her, but is surprised as it turns out to be the zombified bride whom he had killed and is killed and eaten by the zombie as Chuck looks on. Chuck can pick up Randy's chainsaw after his death.

Randy is one of the crazed survivors Frank can fight in Sandbox Mode. He will spawn in the wedding chapel as he does in Story Mode. Once defeated he drops his weapon and $25,000.

Randy's Chainsaw slices through Emanuel Tugman, the victim of Randy.

"You! You're trying to ruin the happiest day of our lives?!" 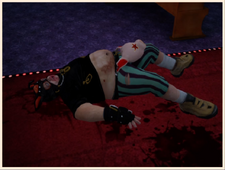 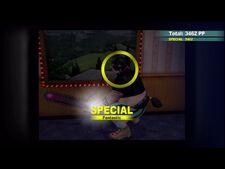 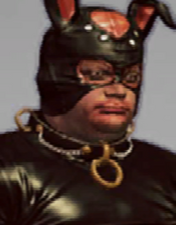 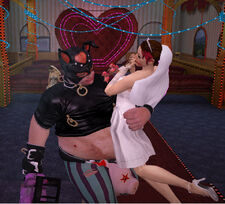