The starving artist. Found in the Cleroux Collection Art gallery in the Palisades Mall.

"These zombies don't know anything about good art! Why did this have to happen?"
—Randolph

Randolph Allen is a survivor in Dead Rising 2. He is found in The Cleroux Collection during the mission Art Appreciation. He is an aspiring artist who is brought to despair by the zombie outbreak. He reappears in Dead Rising 2: Off the Record with the same role.

In Art Appreciation Randolph is found crying in the Cleroux Collection. He laments that his artwork will never be admired and purchased because of the zombie outbreak in Fortune City. When Chuck Greene attempts to get Randolph to follow him to the Safe House, Randolph refuses until Chuck agrees to purchase his painting for $3,000. Once he does so, Randolph agrees to abandon his art and follow Chuck to safety.

Randolph is one of the crazed survivors Frank can fight in Sandbox Mode. He will spawn in Uranus Zone near the UFO Crash ride with a paint can. Once defeated he drops his weapon and $10,000. 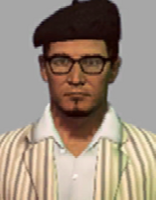 Notebook Picture in Dead Rising 2: Off the Record