Found in the South Plaza Mall, hiding from a psychopath

"What? You... you defeated Mr. High Noon? That's quite a feat! Are you some kind of an action star? You do look familiar..."
—Ray, upon learning of Seymour's demise

Ray Teller is a survivor appearing in Dead Rising 2. He is found by a maintenance room in the unfinished American Undies store during the mission WWJWD?, hiding from Seymour Redding. He reappears in Dead Rising 2: Off the Record with the same role.

In the August 6, 2010 Tape it or Die blog post, Ray was listed by Gretchen Peregrine as one of the members whom they would meet with in Fortune City.

In WWJWD?, Ray is hiding from a crazed security officer named Seymour Redding, who executes every survivor he can find, near a Maintenance Room in the unfinished American Undies store, when Chuck arrives to his rescue. After Seymour is killed, Chuck finds Ray and tells him that he doesn't have to worry about Seymour anymore. He will then follow Chuck to the Safe Room. 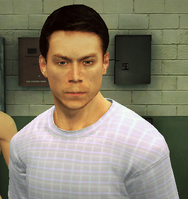 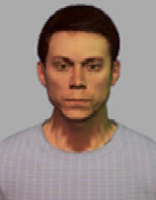