The first (and only) reserve man to make it to the official government shelter alive.

"We're the good guys Chuck, not you."
—Sullivan, speaking to Chuck as he prepares to be extracted

Raymond Sullivan is the hidden secondary, yet important antagonist of Dead Rising 2. He appears to be a member of Fortune City security, and keeps watch over the local safe house. Then it is revealed that he is actually agent of Phenotrans and is responsible for zombie outbreak in Las Vegas and Fortune City.

He reappears in Dead Rising 2: Off the Record with the same role as security officer of the shelter, though he is not the perpetrator behind the outbreak in Fortune City and ends up being shot and killed by Stacey Forsythe.

Sullivan is the security officer in charge of the Fortune City Emergency Shelter, and is responsible for making sure that nobody who gets inside the shelter is infected. He initially prevents Chuck Greene and his daughter, Katey, from entering the shelter when he sees the bite scar on Katey's arm, but Chuck manages to convince him to let them in by showing him a box of Zombrex, which is later revealed to be empty. Sullivan also does not believe Chuck's claim of innocence about causing the outbreak, but agrees to allow Chuck and Katey to stay in the shelter as long as Chuck continues to save survivors and provide Katey with Zombrex. If Chuck doesn't prove his innocence by the time the military gets to Fortune City, Sullivan will not protect Chuck from being arrested.

At the end of 72 Hour Mode, Chuck and Rebecca Chang learn that Phenotrans, the company which produces Zombrex, is responsible for the outbreak. As there has not been an outbreak since the Las Vegas incident two years earlier, the demand for Zombrex has decreased. The loss of Fortune City would not only restore that demand, but increase it exponentially - military weapons and tactics are able to neutralize conventional zombies with ease, but are unable to match the far more dangerous gas zombies.

Rebecca then produces the Satellite phone Chuck took from the Scientists, stating that she will contact her network with this information - which is when Sullivan shoots her in the head, killing her instantly. He then reveals that not only has he been working on behalf of Phenotrans - Tyrone King is in fact subordinate to him - but he was the one who planted the bomb at the arena and caused the outbreak in the first place. He then takes Rebecca's satellite phone and leaves Chuck and the others to die in the military's impending firebombing of the city.

Chuck pursues Sullivan to the roof of the Yucatan Casino, where he has donned a Fulton Skyhook in preparation for extraction via an approaching AC-130. When Chuck confronts him, condemning Phenotrans for its greed, Sullivan mocks him for his short sightedness. Zombrex is a variation of Isabela Keyes' zombie suppressant, which was made from Wasp Queens - and they remain an essential component of Zombrex. And the only way to gather sufficient queens for the mass production of Zombrex is by harvesting them from zombies. Phenotrans had been running low on queens since the Las Vegas incident - and as numerous VIPs such as doctors, celebrities, engineers and major political figures are infected and therefore dependent on Zombrex, further outbreaks are "absolutely necessary" to ensure a steady supply of queens. Chuck becomes furious upon realizing that the Las Vegas outbreak, the subsequent death of his wife, and Katey's infection, was also caused by Phenotrans, and he attacks Sullivan in extreme anger.

After Chuck wears Sullivan down, the AC-130 fires an explosive round, temporarily disabling him. Sullivan uses the opportunity to activate his Skyhook, boasting that he, and Phenotrans, are in fact the "good guys" - just as Chuck handcuffs the waist of his harness to a railing. The AC-130 then snags the skyhook, tearing him in half.

In Dead Rising 2: Off the Record, Raymond Sullivan works with Frank West and allows him to find survivors, just like Chuck in the original game. Unlike the original game, he isn't responsible for the zombie outbreak. His role was replaced by Stacey Forsythe. When Stacey is framed for the zombie outbreak, he doesn't believe in her innocence. He is the security officer of the emergency shelter and watches over the survivors and keeps tab on Tyrone King when he is captured.

When Frank West returns with the evidence from the Underground Phenotrans laboratory, he is shot by Stacey Forsythe after she shoots Rebecca Chang in order to prevent her from calling for help. Just as Stacey was going to execute Frank, a wounded Sullivan tackles Stacey to the ground and knocks her gun away. However, she is able to retrieve her weapon and shoots Sullivan two more times, mortally wounding him. He told Frank some encouraging words and told that Frank must stop her, before dying.

See The Facts for battle tactics and other information.

"We cannot afford to have any infected in here."

"The money is secondary. We're trying to save lives here, Chuck." 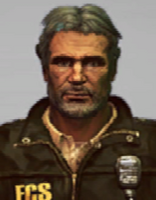 Off the Record's point of divergence

Sullivan after being shot by Stacey

Sullivan and Rebecca after being shot