The Real Mega Buster is a weapon in Dead Rising and Dead Rising: Chop Till You Drop.

The Real Mega Buster is the most powerful ranged weapon in the game and has 300 shots. In Dead Rising, it is unlocked after killing 53,594 zombies and completing the Zombie Genocider achievement/trophy in a single playthrough, obtaining any ending, and saving at the prompt. In Chop Till You Drop, it is unlocked by completing all of the objectives of the mini-game Second Amendment with an S rank. Any enemy in the game can be defeated with six or less shots and this gun easily defeats Psychopaths.

A headshot will instantly kill any zombie or survivor. 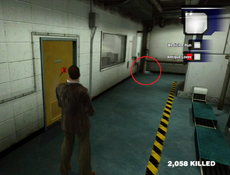 After Frank unlocks the Real Mega Buster, it is found in the same room as all the other unlockable clothing and items (Security Room) lying in the corner.

If the player is carrying a Real Mega Buster with even one shot however, a new one will not spawn if Frank still has one in his inventory. It is advisable to drop the Real Mega Buster that Frank has outside the vent leading to the Security Room, as it makes no difference to the spawned Real Mega Buster where the old one was dropped. The only requirement is that it cannot be in Frank's inventory when entering.