"No one ever got an award playing by the rules, Chuck."
—Rebecca

Rebecca Chang is a survivor in Dead Rising 2. She is an ambitious Asian-American news reporter in Fortune City to cover the controversy surrounding Terror Is Reality. She serves as one of the tritagonists of Dead Rising 2 and the deuteragonist of Dead Rising 2: Off the Record. When the zombies overtake the city, she sees it as her big chance to uncover what's behind the outbreak and get her hands on the scoop of the century.[1] She is fame-hungry, but she is also extremely courageous and confident, oblivious to the danger.

She also appears in Dead Rising 2: Off the Record with the same role as she explores the origin of the outbreak, eager to uncover the story. She is ultimately shot, but unlike Dead Rising 2, she survives and is rescued by Frank West after Tyrone King kidnaps her in Overtime.

Rebecca is featured in the Dead Rising: Road to Fortune comic as she covers the Las Vegas outbreak.

In the four part comic book mini-series Road to Fortune, Rebecca is introduced as a reporter working for KDED radio station with her assistant Jamie. She partners with Frank West to investigates Phenotrans' possible involvement with the rash of outbreaks in the Nevada region. It is revealed through dialog that she and Frank first met several years earlier just after the Willamette Incident, when Frank appeared as a guest on KDED's morning show and Rebecca was just starting out.[2]

Still working for KDED, Rebecca can be heard over the radio covering the Las Vegas Outbreak while Chuck pulls into the Brockett Gas Station in Still Creek.

Ditching KDED for Channel 6 Action News, Rebecca is now a TV reporter, a step up from her previous radio coverage. She and her crew came to Fortune City to report on the controversy of Terror Is Reality, but the outbreak hit before she could do her report. Instead, she began reporting the alleged involvement of Chuck Greene in a broadcast about the outbreak, after receiving a tip from a source. Her determination to find the truth outdid her want for safety, so her crew packed up and left leaving her stranded.

Chuck sets out to find Rebecca and sets foot in the abandoned hotel, only to have a zombie attack from behind. Rebecca shoots the zombie in time, saving Chuck's life. The two talk about Chuck being framed and how this is the story of the century. She agrees to accompany him to the security room in the Fortune City Arena in exchange for an exclusive interview, only to find all three guards murdered, monitors and equipment smashed, and the security tapes stolen. Rebecca is left alone in the security room to tape the mess while Chuck retreats to the Safe House. 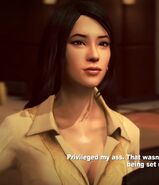 During a dispute with Officer Sullivan, Rebecca shows up in the Safe House and begins taping the argument and then Katey, only to receive backlash from Chuck. The pair are interrupted as Stacey spots some men in the Underground Tunnels on the security monitors. Excited for a possible development in the story, Rebecca rushes to the tunnels on her own to try and investigate. As Chuck takes out the armed mercenaries who are robbing the city's casino vaults and disables their van outside the Atlantica Casino, Rebecca lurks nearby, filming the shootout and the aftermath, only to be thrown back by the explosion of the van, but saved by Chuck. 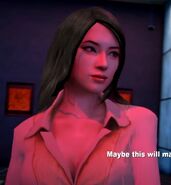 Rebecca is later captured and held hostage by her source, who are the Terror is Reality co-hostesses, Amber and Crystal, in a nightclub. She is rescued by Chuck and heads to the Safe House rooftop after hearing about Tyrone King trying to escape via helicopter. She and Chuck spot the helicopter landing atop the hotel and together they head over. Atop the roof, Chuck battles TK, his bodyguard and his helicopter pilot. Once TK is defeated, he is brought back to the Safe House along with Rebecca, who was filming the entire incident.

Once the military arrives in the city to begin the cleanup and rescue, she heads out to film the operation. Instead she witnesses the military being slaughtered by newly mutated zombies. She flees from the newly mutated zombies, and follows the commander of military squad, Sergeant Dwight Boykin down into the tunnels to investigate. However, she is captured and held hostage by him after he went insane. She is knocked unconscious and put inside his Humvee, though Chuck fights Boykin and rescues her.

Later in the security room, as Rebecca attempts to call for help from her news station to pick up her and the survivors, she is shot in the head and killed by Raymond Sullivan, who was on the payroll of Phenotrans, the pharmaceutical company behind Zombrex.

Rebecca picks up the phone

She is about to make the call

As Rebecca makes the phone call

She is shocked to see a gun

Before she can react, she is head shot by Sullivan

Rebecca falls on the ground without any life sign

In Dead Rising 2: Case West, when Frank West saves Chuck from the zombified Tyrone King on the rooftop of the Fortune City Emergency Shelter, he reveals that he and Rebecca were colleagues and friends. The pair had plan on investigating the Phenotrans facility west of the city but unfortunately, she was killed.

NOTE: Rebecca's fate in Dead Rising 2: Off the Record is considered non-canon

Rebecca returns in Dead Rising 2: Off the Record, which is a "what-if" scenario. Rebecca resumes her role as the ambitious and fame hungry news reporter. She and Frank have a history together and this is evidenced when Frank says she isn't the weather girl anymore. She helps Frank explore the origin of the outbreak and is kidnapped by Tyrone's goons. She is rescued and brought back to the shelter. After Frank gives her the Phenotrans laptop from the lab, she attempts to call her station only to be shot, but this time, she is shot in the stomach rather than in the forehead and the gunshot wound is not lethal. Frank believes that she is dead and after defeating Stacey, he returns to find Rebecca missing with Sullivan still where he died. Frank then finds out TK kidnapped Rebecca and asks Frank to bring him a number of things for himself and Rebecca's need. After Frank gets everything TK wants, he is about to enter the arena but TK shocks Frank with an electric prod. Frank must survive the onslaught of zombies in the TiR Arena until Rebecca lowers a rope to bring him up. After this has happened, Frank and TK engage in battle with TK being thrown over the railing and falls to his death. Frank and Rebecca then leave the arena.

Rebecca is one of the crazed survivors Frank can fight in Sandbox Mode. She will spawn in front of Moe's Maginations with an LMG. Once defeated she drops her weapon and $15,000.

"It has been almost twelve hours since the first reports of a zombie outbreak in Las Vegas. The death toll is estimated to be over one hundred thousand, and as many as a staggering one million people may be infected. The president has initiated the Willamette Act, and the government is scrambling to respond to this disaster. To ensure that the contagion does not spread, the military has set up a fifty mile perimeter outside Las Vegas. They have "shoot to kill" orders for anyone off the main roads. The number of vehicles leaving the city has trickled to a stop in the last few hours, an ominous sign that few survivors remain. With thousands of vehicles having escaped the city over the past twelve hours, military and government personnel are screening everyone at the roadblocks before allowing them to leave the quarantine area. Anyone discovered to be infected but not yet turned will be quarantined and reportedly given medical attention. Sources say that the controversial drug Zombrex, which is said to inhibit the zombification process for a period of twelve hours, is being widely administered. The fate of the quarantined remains unclear at this time. The government has issued no statements regarding where they will be taken, or what will become of them. This is Rebecca Chang reporting live from just outside Las Vegas."
—Rebecca Chang[4] 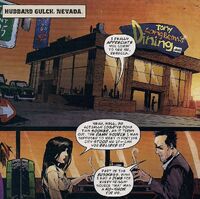 The first official meeting between Rebecca Chang and Frank West.

Rebecca in Road to Fortune #2 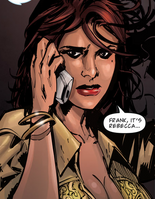 Rebecca in Road to Fortune #3 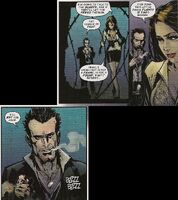 Rebecca and Frank at the scene of the Las Vegas Outbreak. 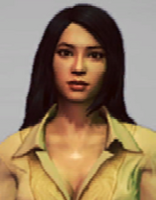 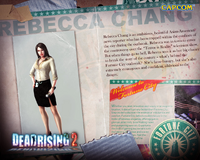 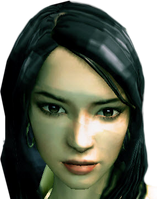 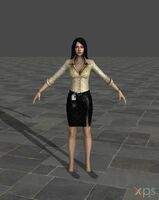