One of a pair of failed professional magicians, experimenting with a new, spectacularly gory trick - on anyone unlucky enough to be around.

"Everyone's a critic aren't they? You think this is easy?"
— Reed, responding to Chuck's "criticism"

Reed Wallbeck is a psychopath found in Dead Rising 2 during the mission World's Most Dangerous Trick.

Before zombies invaded Fortune City, Reed and his partner Roger Withers were once failed magicians seeking fame. However, they both went insane after the outbreak. He reappears in Dead Rising 2: Off the Record with the same role.

When Chuck/Frank finds the two magicians, they are rehearsing for a new magic show with Reed often berating Roger for messing up their scenes. He then attempts "the most dangerous trick in the world", cutting a hostage named Madison Lainey in half with a large saw. However, Reed fails his trick and Madison is killed. While Reed laments another failure, Chuck/Frank points out that they have murdered the woman. Reed yells at Chuck/Frank for insulting them, as they are just practicing. Reed then tries to kill Chuck/Frank with a Rocket Launcher. After being defeated, Reed lies dying as an injured Roger crawls over to him and stabs him to death with a dagger. Roger happily says he had always wanted to kill Reed and then succumbs to his own wounds.

Reed is one of the crazed survivors Frank can fight in Sandbox Mode. He will spawn with Roger in their usual spot in the Atlantica Casino on the first day. Once defeated, he will drop his weapon and $25,000.

Reed is annoyed at Madison's death. 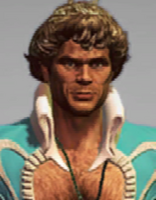 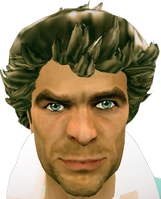