Rhonda is a main character in Dead Rising 3.

She is Nick's boss who owns the Wrench O' Rama auto shop in Ingleton where they both work.[1] She is an excellent mechanic who has a "do or die" attitude. [2]

She is strong, both physically and mentally and acts as a supporting role towards Nick. She often calls Nick "honey" or "sweetie" and even calls him "her sweet boy" at one point. She considers Nick family, and the two seem to have a strong mother-son bond.

She is travelling with Nick and Dick in an attempt to escape the city.[3] She works hard to attempt to fix the airplane that will get the group out of Los Perdidos.

She later starts a search to find her ex-husband and is met with an unfortunate fate when she loses her left arm.

Rhonda, Dick, Annie, Peter and his mother are using the Dilly Diner as a safe house during Chapter 0. After the diner is attacked by zombies, Rhonda recommends that they go to her garage Wrench-O-Rama in Ingleton. She tells Nick to create a combo weapon before they escape. Once at the garage, she will work on fixing the TV while Nick explores Ingleton. Talking to Rhonda will finish Chapter 0 while the group watches the news report for an update on the outbreak.

She travels with Nick and Dick to the Quarantine Station during Chapter 1. When they arrive, the group is ambushed by a group of thugs. Two men attempt to abduct and sexually assault Rhonda, but she manages to overpower the men and hides while Nick deals with the remaining thugs and their leader Hunter. After Hunter has been killed, Rhonda comforts Nick, telling him that it was "them or us".

After Nick gets bitten during the start of Chapter 2, Rhonda tells him to go to the morgue to get Zombrex, as morgues will always carry an emergency supply. Instead of going with him, she goes with his friend Diego to investigate the airplane that he has told them about.

When Nick returns to the warehouse at the start of Chapter 3, he tells Rhonda, Diego and Dick of the offer that Gary had put forth. Rhonda and the others immediately agree that turning Annie in to Gary would be the best idea. Rhonda tells Nick the locations of where the Illegals hang out by showing him the symbol that they used to mark places of safety.

She stays in the warehouse with Dick to work on the airplane while Nick searches for fuel. When he returns to the end of Chapter 4, Rhonda informs him that Diego has gone missing. For the first time, she starts to show signs of panic. She was worried that Nick wasn't going to return, and is thinking about all of the things that she regrets from her past, including the relationship with her ex-husband. Nick quickly comforts her before the chapter comes to an end.

She tells Nick about the missing parts that the plane needs at the beginning of Chapter 5 before suggesting that he go and find Diego at the museum. When Nick returns with Diego, she asks that he give her a few hours so that she can figure out where to find the parts that they need. Talking to Rhonda will end the chapter, and the cutscene for Chapter 6 will start soon after. Rhonda tells Nick to go to a collector's house to collect the three missing parts that the plane needs.

After Nick returns with the parts, Rhonda will quickly fix the plane to make it run. After congratulating Nick on all of his hard work, she reveals that she is setting off on her own in search of her ex-husband. She wants to make things right before it's too late, and says her very emotional goodbye to Nick. Nick and Diego are captured by the Special Forces shortly after, and Rhonda is not seen again until Chapter 7.

During Chapter 7, Nick must bring Rhonda to Gary in order to save Annie. His search brings him to Wrench-O-Rama in Ingleton where she is laying on the floor bleeding. Special Forces soldiers tortured her and eventually amputated her left arm as they questioned her about Nick's whereabouts. Nick must go to Roy's Mart to collect a first aid kit to stop the bleeding. After this, Nick asks that Rhonda come with him to find Gary, but Rhonda refuses on the grounds that she doesn't look presentable enough. She will ask for an acetylene tank, a hinge and a soldering iron in order to create a new arm. After Nick has gathered all the materials, he will make Rhonda a robotic flamethrower arm.

Nick can then bring Rhonda to Gary at the karaoke club and reunite the two. After Red's defeat, Chuck shows up with Rhonda and Gary at the warehouse and Annie reunites with her father. The group then goes to the warehouse to get the airplane running. Chuck points out that there isn't enough seating for everybody, but Rhonda and Gary insist that they are staying in Los Perdidos in order to help evacuate survivors. Nick is saddened by the news, but Rhonda insists that Nick will always have a family with her and Gary.

Brad Park picks Rhonda and Gary up at the Los Perdidos Communication Tower. Rhonda is seen in the last cut scene as the group escapes the city together safely. It is unknown what Gary and Rhonda did in between the time that they left Nick and were found by Brad. 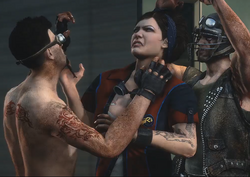 Rhonda fights with Mel and Clyde.

Rhonda with the custom paint job. 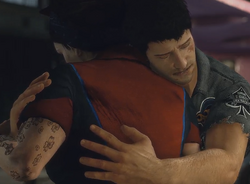 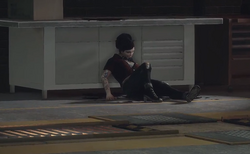 Rhonda lays on the floor bleeding. 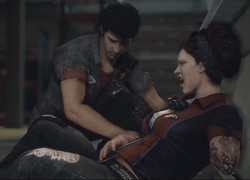 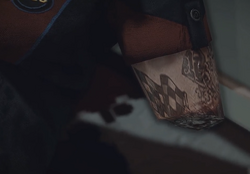 Rhonda's arm has been amputated.

Rhonda gets a new robotic arm... 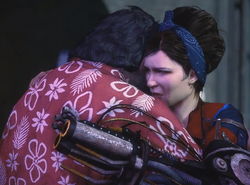 Rhonda is reunited with Gary.