Was captured and held by Cliff.

"You don't look like any friend of his. I can trust you... Right?"
—Rich, upon speaking with Frank

Rich Atkins is a survivor appearing exclusively in Dead Rising.

He is found in the empty store next to Crislip's Home Saloon. He is held hostage by Cliff Hudson during the scoop The Hatchet Man and can be freed after Cliff's defeat.

Rich was mistaken as a member of the Viet Cong and held captive by the psychopath Cliff Hudson. He and two other captives, Josh Manning and Barbara Patterson, were trapped inside an empty store next to Crislip's Home Saloon.

After Cliff is defeated, Frank unlocks the doors and convinces the three frightened survivors to follow him to the Security Room. If Frank kills one of the survivors before recruitment, none of them will be willing to talk to Frank, and they become impossible to recruit.

After being rescued, he will wait in the security room with the other survivors. When Kindell Johnson believes that there is no helicopter coming in three days, he rallies up the other survivors in the same room, including Rich, to escape back into the mall.

If Frank does not stop Kindell's mutiny, Rich will leave the Security Room along with the other survivors in the same room. They will no longer count towards the number of rescued survivors.

Rich and Cliff's other captives.

Rich and other survivors safe in the Security Room. 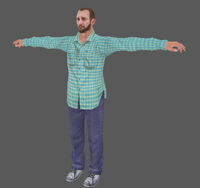 Add a photo to this gallery
Retrieved from "https://deadrising.fandom.com/wiki/Rich_Atkins?oldid=396913"
Community content is available under CC-BY-SA unless otherwise noted.