"Powerful blades cut through zombies as if they were tissue paper."
—Combo Card Description

The Ripper is the deadlier version of the cement saw, with its single, circular, cement-cutting blade replaced with 4 serrated saw blades; and its blade guard retracted to expose more teeth. It acts like a more agile, yet closer ranged brother of the chainsaw; it has a shorter cutting range but a wider swing. Like the chainsaw, Chuck can injure zombies just by bumping into them with the Ripper's motor running. The Ripper is a heavy weapon; it cannot be stored in the inventory and injuries will cause Chuck to drop it.

"A cement saw has a round, plate-like blade at the end, which is not nearly as devastating as it would be if you added a serrated saw blade. Once you do, the Ripper works like a more maneuverable chainsaw."[1]

Case West locations of weapons needed to make the Ripper.[2] 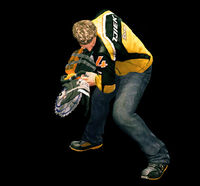 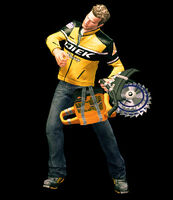 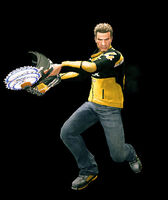 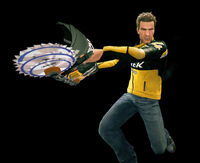