The Roaring Thunder is a combo weapon in Dead Rising 2, made by combining a goblin mask with a battery.

After putting it on a zombie it will shoot lightning at any zombie nearby until the wearer is dead.

"Like the Fountain Lizard, you can slap the Roaring Thunder mask on any random zombie and they'll wander around. In this case it's death by electricity instead of fire, though."[1] 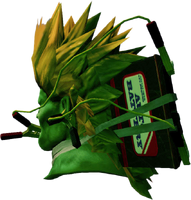