"You? I bet you guys started this mess. Look, get me an Security AR so I can get out of here."
—Robert, upon meeting Chuck

Robert Staymore is a survivor in Dead Rising 2: Case West. He is a scientist found under the Security Outpost in the Holding Pens. He appears after Case 2-2: Infiltration is activated, around 4pm.

Robert Staymore is a researcher who was found beneath the Security Outpost, surrounded by zombies. He is standing on a metal crate shouting for help. Once the zombies have been dealt with, Robert blames Chuck and Frank for the mess and requests a Security AR in order to flee the Phenotrans Facility. Once receiving the rifle, he makes his way through the Holding Pens to escape the compound. 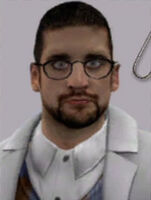 You? I bet you guys started this mess. Look, get me an Security AR so I can get out of here.

Get me an Security AR or I don't stand a chance! 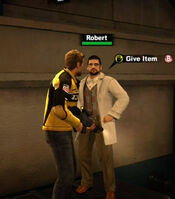 Thanks, now I just need to escape.

Add a photo to this gallery
Retrieved from "https://deadrising.fandom.com/wiki/Robert_Staymore?oldid=383629"
Community content is available under CC-BY-SA unless otherwise noted.