"A steady stream of pyrotechnics create the perfect show of lights and gore."
—Combo Card Description

The Rocket Launcher is a combo weapon in Dead Rising 2 and Dead Rising 2: Off the Record, made by combining a lead pipe with rocket fireworks.

Chuck can shoot fireworks at enemies at a relatively fast rate, clearing hordes of zombies with a short burst. The fireworks need to travel a small distance to be lethal, so Chuck should not fire them point blank or they will just bounce off an enemy before going off. Getting stuck in an explosion causes Chuck to drop the weapon.

The Rocket Launcher has a small advantage over most other heavy weapons in that it has no motor that requires starting before it can be used, Chuck can simply pick it up and start firing.

It can be combined with a Motorbike to create a Rocket Launcher Motorcycle.

"Not quite what you're thinking. A series of pipes fires off the fireworks inside. They aren't super accurate, but they do explode limbs like a charm."[1] 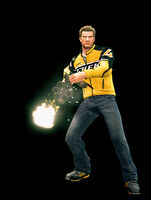 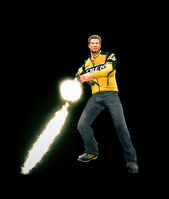 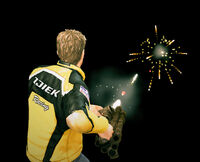 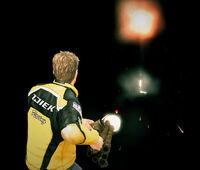 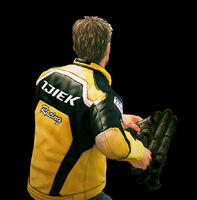 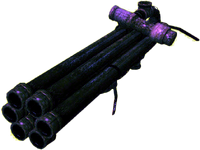