"Frank... Ronald's startin' to panic about the lack of food around here. He's ready to take a group of people out to scavenge for some. You'd better bring some food back here quick before they get themselves in trouble."
—Otis Washington

Ronald's Appetite is a scoop in Dead Rising.

On the evening of the second day, Ronald Shiner will start a mutiny and plans to leave the Security Room to look for food.

Frank will need to go back to the Security Room in order to stop Ronald's mutiny.

Due to a lack of food, Ronald Shiner panics and rallies up the other survivors in the Security Room to head out and look for more. Frank arrives to calm Ronald down by delivering food, claiming that he has a secret stash for them.

Frank assures Ronald that there's rations for everybody.

Frank suggest that Ronald is eating too much on his own.

Ronald calms down after he's given food. 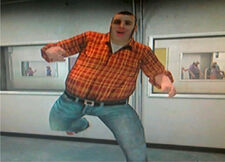