Student trying to make it as a comedian. Found in Hot Excitorama.

Off the Record
From Fortune With Love

Royce St. John is a survivor in Dead Rising 2 during the mission Two's Company. He is found in Hot Excitorama arguing with Walter Morris.

He reappears in Dead Rising 2: Off the Record with the same role, though he is found in From Fortune With Love in Uranus Zone.

Royce St. John and his pal Walter Morris are holed up in Hot Excitorama where the two wanted to perform stand-up comedy but the zombie outbreak in Fortune City demolished their chances. He will not leave the club until a decision is declared on who is funnier, either him or Walter.

Royce is one of the crazed survivors Frank can fight in Sandbox Mode. He will spawn in Uranus Zone with a broadsword. Once defeated he drops his weapon and $10,000. 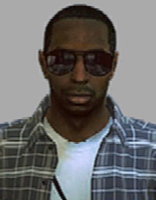