Key figure in the Willamette incident.

Dr. Russell Barnaby is an elderly professor crucial to the Department of Homeland Security in Dead Rising. Brad Garrison and Jessie McCarney were sent to Willamette to safely escort the professor out of the Willamette Parkview Mall.

Dr. Barnaby was anonymously requested to be in Willamette during the time of the outbreak. He seems to have information about the Willamette Incident that he is withholding and becomes a key figure in unfolding the events behind the outbreak.

He is stubborn and suspicious, not wanting to cooperate with the DHS's investigation. He is eager for protection and is very adamant about getting out of Willamette safely.

He is not only important to the Willamette Incident, but is also revealed to be the head scientist behind the research that destroyed Santa Cabeza. This ultimately makes Dr. Barnaby directly responsible for every event in the series.

Frank is seen taking pictures of Dr. Barnaby in the Entrance Plaza just before the zombies break into the mall. Barnaby accuses Frank of being the one who summoned him to Willamette, but Frank tries to explain that he has no idea what he's talking about. The zombies breach the barricade shortly after, but because Barnaby was seen on the other side of the locked gate during the break in, he was fortunate enough to have escaped unharmed.

After Frank assists Brad Garrison in Case 1-2, the next case file will start, with Brad leading Frank back to the Entrance Plaza to look for Dr. Barnaby.

Brad and Frank find Dr. Barnaby hiding behind the locked gate in Everyone Luvs Books. Brad tries to convince him to follow him to the safety of the Security Room, but Dr. Barnaby refuses, claiming that he is safer where he is. A frustrated Brad decides to retreat back to the Security Room for now and call for back up.

Case 2-1: Image in the Monitor

The day after confronting Dr. Barnaby in the book store, Jessica McCarney sees a disturbing image in the monitors at the Security Room. A man is seen dragging Dr. Barnaby out of his hiding place. Knowing how crucial the professor is to their investigation, Brad heads out to save him.

Upon pursuing Brad to the Entrance Plaza, it's revealed that Carlito Keyes was the one who captured the professor, who is now dangling from a rope above a group of zombies. Carlito attempts to shoot at Brad and Frank using a sniper rifle, but the two manage to dodge the bullet before carefully advancing towards Carlito.

After Carlito is defeated, Frank unties an unconscious Dr. Barnaby and carries him back to the Security Room.

Barnaby finally wakes up and overhears Frank mention Santa Cabeza to Jessie. When he mutters that he thought Santa Cabeza was over with, Jessie attempts to interrogate him about his knowledge on Santa Cabeza. Frank tries to listen in as he takes pictures in the background, but Barnaby notices his camera and refuses to speak. Jessie closes the door on Frank, prompting him to find information elsewhere.

As Isabela explains the truth behind Santa Cabeza, Dr. Barnaby emerges from the closet, attacking Jessie. Isabela exclaims that he's started to turn as Frank kicks him off of Jessie. As he lays dying, Dr. Barnaby maintains his innocence in his involvement in the downfall of Santa Cabeza, although he confesses to discovering the bees that now carry the zombie virus while trying to find a way to mass-produce cattle.

When he reanimates, he is immediately shot in the head by Brad and killed.

Dr. Barnaby was unfortunately infected during his capture by Carlito. The security room survivors were unaware of his infection. As he underwent the zombification process, Dr. Barnaby attacked Jessie, infecting her with a slight scratch wound. He became a zombie shortly after, and was shot in the head by Brad.

It was ultimately unknown whether his exposure to the hordes, a wasp infecting him or a bite wound was responsible for his reanimation.

Dr. Barnaby can be saved by Frank if the latter did not pursue the major case files, or did not investigate the incident's information in time. Dr. Barnaby will be evacuated on September 22, along with Brad, Jessie, Otis and the other survivors Frank rescued, in Ed DeLuca's helicopter. However, his infection is still imminent and judging by Ending B's epilogue, Dr. Barnaby would possibly reanimate and participate in the infection of the rest of America.

Barnaby appears as a zombie in Crislip's Home Saloon at North Plaza from 4:19:00 to 5:00:00 and is unarmed. He will drop an Apple, Rotten Pizza, Spoiled Meat, Handgun and Hunting Knife when killed. He will respawn.

Barnaby is first mentioned in Case 3. An old colleage of his, Dr. Diane Blackburne, shows Frank a photo of the two when they were younger. Dr. Blackburne believes that Barnaby's research is key to figuring out the cause of the current outbreak in Willamette. Frank can travel to the remnants of Barnaby's lab, which still stand many years later. This is in the basement of the Golden Apple Vineyards, which Barnaby owned. Inside the lab, Frank finds the strange machine which is later revealed to have thought to been a cure for zombification.

When Calder and his men raid Barnaby's lab, they accessed a log he made before leaving for the mall during the first outbreak. In it Barnaby says he has no idea how the outbreak started and believes he is being summoned to his death, saying he recognized the voice. He went on to say how zombies were the key to making humans immortal, was disappointed that the livestock angle failed and that the government wants to weaponise the infection. His reasons for leaving the safety of his lab was a desire to see his work in action, if he was infected he would need to return to his lab and use his machine to cure himself. He ends his log by saying he fought to his last breath to protect life but only brought death.

Note: This is a framing for the story of Dead Rising and explains the happenings behind the Santa Cabeza Incident, and should be considered canon.

Dr. Russell Barnaby was the head of a U.S. scientific research facility in the Central American town of Santa Cabeza. His research team was funded and supported by the U.S. government, and they were tasked to experiment with the local livestock in an effort to mass-produce cattle to reverse the trend of dwindling American meat supplies. The covert project's purpose was simple; if successful in reproducing cattle at an accelerated rate, the government could feed more Americans, whose rapid consumption of meat was becoming too expeditious for distributors to cater. Dr. Barnaby and his research team's progress advanced significantly when a previously undiscovered insect species was discovered in the region beside the local Pachacamac River. Scientifically named Ampulex Compressa Giganteus, the scientists discovered their abnormal properties of using cattle as hosts, and attempted to utilize the wasp's processes to mass-produce cattle. However, the project failed when one of the mature wasps, referred to as a queen, escaped the facility. Consequently, Santa Cabeza and it's population was ravaged by the resulting parasite.

The U.S. government recognized Dr. Barnaby's failed results as a critical danger to the country. They responded by repressing all rumors and indications of the incident ever occurring. Their decision was largely performed by the U.S. Special Forces, who were ordered to exterminate all civilian and non-essential survivors in Santa Cabeza to keep the epidemic disaster from becoming public knowledge. Despite his failure, Dr. Barnaby and his research team were notably spared from the government's execution orders due to their high-ranking positions and valuable knowledge, classifying him as one of the few non-military survivors.

Dr. Barnaby in the Entrance Plaza.

Dr. Barnaby is tied up and held captive by Carlito. 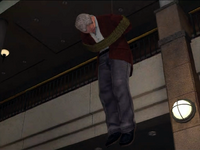 Dr. Barnaby as a zombie.

Close up of zombified Barnaby. 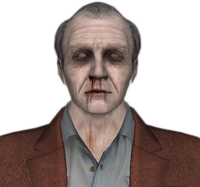 A young Barnaby with Dr. Diane Blackburne in Dead Rising 4