"The winter is deadly, it bites to the bone. Poor Frank has been naughty, and now he's alone."
—Sadistic Claus when encountering Frank 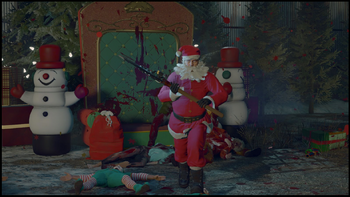 He is a mall Santa who worked for the Willamette Memorial Megaplex Mall and went insane when the outbreak hit. According to Paula, he has been murdering survivors and stuffing their corpses with presents. He is also assisted by a group of murderous survivors dressed like elves. He will attack Frank when he goes to investigate the Christmas Tree Lot, which Claus and his helpers have rigged as a trap. He will first send waves of elves to attack Frank before he comes out and attacks. When killed, he drops the Electric Axe.

Retrieved from "https://deadrising.fandom.com/wiki/Sadistic_Claus?oldid=394268"
Community content is available under CC-BY-SA unless otherwise noted.