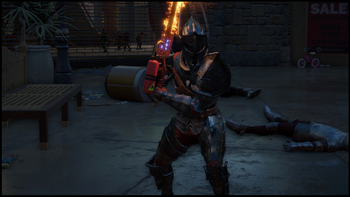 "Queen" Sandra is a Maniac in Dead Rising 4.

She is a woman dressed in a suit of armor who lurks in the medieval town section of the mall, along with several other "knights". Her weapon is a Flaming Sword. She is the first maniac in the game, and the only one required to fight in order to progress with the story.

Frank West encounters Sandra when he tries to gain access to Medieval Town for the first time. The gate is closed and guarded by her followers, and they taunt Frank, intending to steer him off. However, Frank taunts them back, enraging them to the point that they open the locked gate. After defeating some of her followers, Frank can defeat Sandra herself on the other side of Medieval Town. After she is killed, Frank can pick up the Flaming Sword.

Retrieved from "https://deadrising.fandom.com/wiki/Sandra?oldid=393133"
Community content is available under CC-BY-SA unless otherwise noted.