Sarah Stayer is a character that was removed from the final version of Dead Rising 2, for unknown reasons. Her model and name only exist within the game's files. Aside from the fact that she seems to be injured, nothing else is known about her. Sarah is a survivor she was involved in Mission but it was scrapped. Chuck had to escort her to the Safe House Bunker and had to carry her because she is injured. 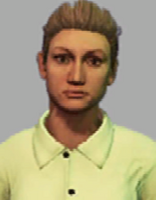 [infinity mode mod
Add a photo to this gallery

Retrieved from "https://deadrising.fandom.com/wiki/Sarah_Stayer?oldid=395306"
Community content is available under CC-BY-SA unless otherwise noted.