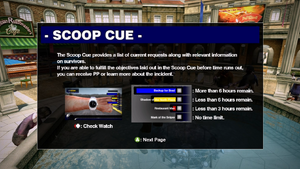 Scoops act as side missions for Frank West to complete during the course of 72 Hour Mode in Dead Rising and Dead Rising: Chop Till You Drop. Scoops differ from Cases as they are completely optional and not required to complete the story or unlock Overtime Mode, making scoops akin to 'side quests'. Most scoops require you to find and rescue survivors either from psychopaths, zombies or themselves. Frank can earn Prestige Points and level up by completing scoops.

They are replaced by missions in Dead Rising 2.

Chop Till You Drop Scoops[]

Frank will also not get scoop calls if he is in the security room, helipad or rooftop. Frank will only get Otis's transceiver call when he leaves these locations.