A Western-obsessed, insecure security guard who sees the outbreak as his long-awaited chance to be "the law" and get the respect and power he feels he deserves.

Seymour Redding is a psychopath appearing in Dead Rising 2 during the mission WWJWD?.

He is a security guard who has taken the zombie outbreak in Fortune City as an opportunity to act as de facto sheriff. Using his new found authority, he sets up makeshift gallows in the South Plaza and begins executing Justin Tetherford and other survivors by hanging.

He reappears in Dead Rising 2: Off the Record with the same role, though he accuses Frank West of trying to steal the "big shot" role from him.

Chuck comes across Seymour taunting a captive man named Justin Tetherford, declaring him a looter, while the man tries to defend himself, stating that he was just looking for food. Seymour ignores the man and throws the man off the scaffold where he is standing on, snapping his neck. After the execution, he sees Chuck nearby and declares him a looter and begins to attack him.

After Seymour is defeated, he attempts to flee by climbing up onto a large statue, inadvertently turning on a nearby table saw in the process. As he is climbing, he tells Chuck that he is "twice the man" he is before losing his grip and falling onto the saw, killing him. Chuck dryly comments with "I saw what you did there." Chuck refers to Seymour's dead body, as he fell on the saw blade. After Seymour's death, Ray Teller, a survivor that was hiding from Seymour, will call for Chuck and join up with him.

Seymour is one of the crazed survivors Frank can fight in Sandbox Mode. He will spawn in the South Plaza by the statue he used to hang people. Once defeated he drops his weapon and $25,000.

Seymour about to execute Justin.

Trying to escape from Chuck. 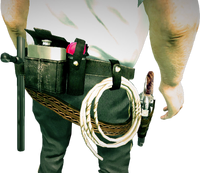 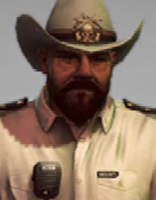