The Shockdozer is a combo vehicle in Dead Rising 3.

It can be created by combining an Ambulance with a Backhoe Loader. It is the largest of all vehicles, the most powerful, and the most durable. It is practically indestructible, and additionally, it can carry Nick and five other passengers. On the other hand, its slow speed and massive size means that it has great difficulty navigating obstacles that other vehicles would have very little trouble with.

On a very minor note, it is also the only combo vehicle that cannot drift, due to having all-wheel brakes.

The blueprints are found near the hospital entrance in Central City. 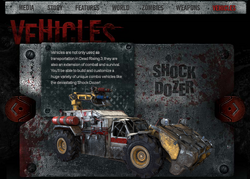 Shock Dozer was originally teased with a silhouette on the official Dead Rising 3 website.

Front.
Add a photo to this gallery

Retrieved from "https://deadrising.fandom.com/wiki/Shockdozer?oldid=391163"
Community content is available under CC-BY-SA unless otherwise noted.