Worried about her zombie bite wound.

A Woman in Despair
Simone the Gunslinger

"I've been bitten. I mean... I was treated and all, but there's no telling when I'll change. I don't want to cause trouble for everyone... They've got enough problems without me..."
—Simone, after asking for a gun
"Maybe I should check in on that Isabela woman..."
—Simone, upon reaching the Security Room

Simone Ravendark is a survivor appearing in Dead Rising and Dead Rising: Chop Till You Drop.

She is found in Players in Paradise Plaza during the scoop A Woman in Despair, and is in hiding after being bitten by a zombie.

She will need encouragement before she can be escorted back to the Security Room.

A Woman in Despair[]

Main article: A Woman in Despair

Simone is a young woman who has been bitten by the zombies after losing her family and boyfriend to them. Frank finds her in a music store and tries to convince her to come back to the Security Room with him, promising that a helicopter is coming to rescue them.

Fearing that her eventual zombification will pose a problem for the other survivors, Simone requests Frank to bring her a handgun. If Frank accepts her wishes, she promises not to use it unless it is inevitable.

It's possible that she escaped Willamette with Otis and the others when the special forces arrived and gotten zombrex.

In Infinity Mode, Simone appears in Jamming Juvenile at the Entrance Plaza from 4:00:00 to 4:07:00 and is armed with a Bowling Ball. In her equipment she carries a jug of Milk, a Potted Plant, a Toy Laser Sword, a Novelty Mask (Demon), and a Golf Club. 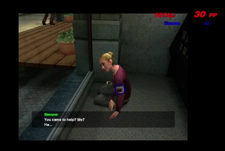 A photo of Simone's wound. 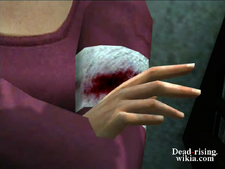 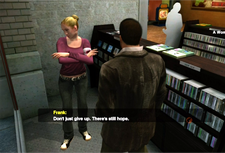 Simone is urged by Frank to flee.

Simone is angry with Frank.

Simone in the Security Room. 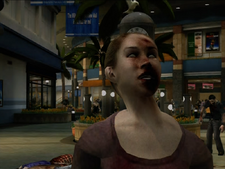 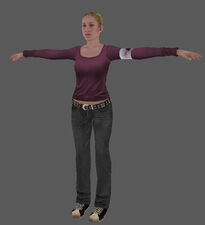