It is a tool with a large, flat head attached to a handle, with a head made of metal. Due to its large size, the sledgehammer can apply more force than other hammers and distributes force over a wide area. It is commonly used for demolition purposes and nailing rail spikes into the ground. It will often tear off a zombie's arm, leaving a blood-spurting wound.

Sledge hammers can commonly be found in the Underground as well in several casinos and maintenance rooms, including one in the access corridor leading to the Safe House. It can be combined with a fire axe to make a Defiler (or with a battery to make an Electric Crusher in Off the Record). Its durability can be increased with the Building magazine.

A "Test-of-Strength" carnival game can be found at The Man's Sport in the Royal Flush Plaza. If you have a sledge hammer equipped, you can ring the bell and earn a 5,000-PP bonus. 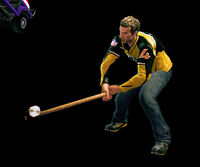 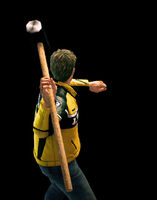