The Sledge Saw is a combo weapon in Dead Rising 3.

It is made by combining a sledgehammer with a cement saw. It is the first combo weapon in the game that Nick receives the blueprints for. Nick quickly makes the sledgesaw so that he and his friends can escape the Dilly Diner during Chapter 0.

The sledge saw slices zombies in half. 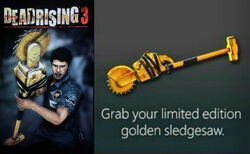 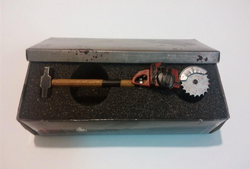 The Sledge Saw pen, which was included in Lootcrate's October 2014 box.

Chase Carter wielding the Sledge Saw in Dead Rising: Watchtower.
Add a photo to this gallery
Retrieved from "https://deadrising.fandom.com/wiki/Sledge_Saw?oldid=398454"
Community content is available under CC-BY-SA unless otherwise noted.