For the Terror is Reality event, see Slicecycles.

The Slicecycle is arguably the most dangerous weapon in the game, due to its superior strength and attack speed, with its durability. The Slicecycle is a simple design of a motorcycle and two chainsaws attached to the handlebars of the motorcycle. The bike can kill about 1000 zombies before breaking, unless the player crashes, in which case the possible kill count is lowered.

It is a standard motorcycle, with the useful addition of two chainsaw blades acting like wings on either side, slicing anything that the player drives into.[1]

Chuck can find a chainsaw on top of the stage in the Silver Strip or in the maintenance room beside Hot Excitorama.

In Off the Record, after defeating the psychopath Chuck Greene during the mission People Like Us, Frank also acquires a key to the Combo Bay and a green dirtbike.[2]

The following is a list of every item that the player can combine with the bike:[3] 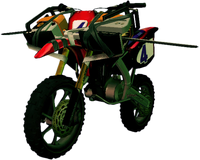 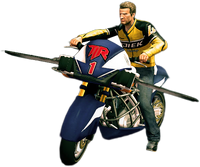 Chuck on a Slicecycle near the Yucatan Casino

Slicecycle schematic located on the inner wall of Leon's trailer

From Tape it or Die Blog